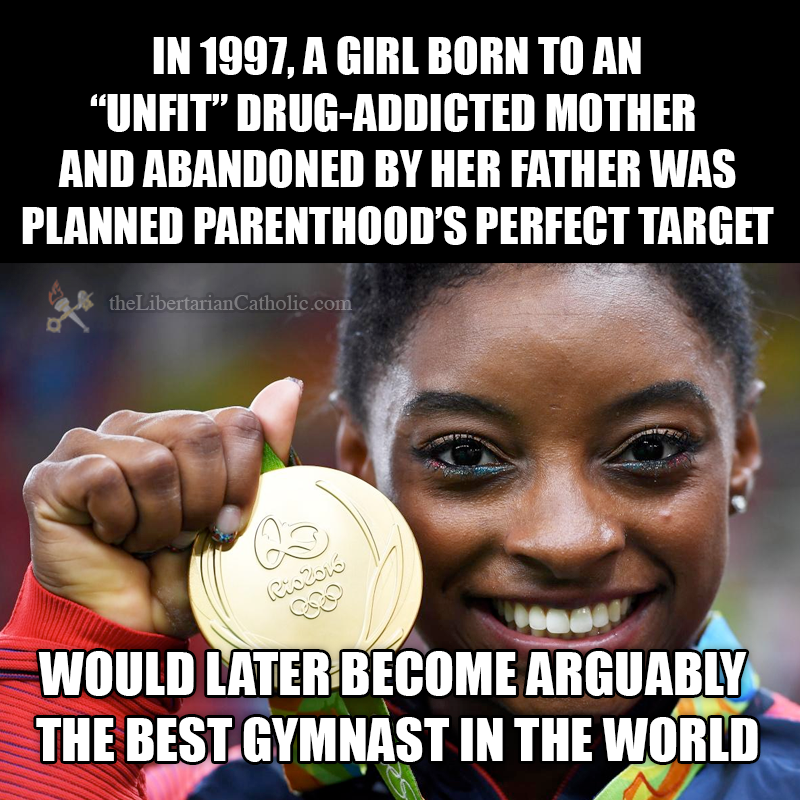 In 1997, a girl born to an “unfit” drug-addicted mother and abandoned by her father was Planned Parenthood’s perfect target. She would later become arguably the best gymnast in the world. #lifeIsGolden

The incomparable Matt Walsh was no doubt inspired by this meme and chimed in via the Blaze:

I think this is especially relevant to consider in the case of Simone Biles. As has been discussed many times over the past week, Biles is a child of poverty and misfortune. She was born to a poor, drug addicted, alcoholic single mother. Her father wasn’t in the picture. Her mother wasn’t able to care for her. She and her siblings bounced in and out of foster care for the first five years of her life, until she was finally adopted by her grandparents. Nonetheless, within 10 years, Biles would be competing in international gymnastic competitions. Within 15, she would be amassing a treasure chest of gold medals at the Olympics, and many people would be calling her the greatest gymnast of all time.

But if Planned Parenthood and the abortion industry had their way, she never would have made it to the podium. She never would have seen the light of day. She wouldn’t even have a name, let alone Olympic gold medals and approximately a zillion dollars in upcoming endorsement deals. She would be one of the untold millions; dead, discarded, decomposing in a medical waste dumpster behind an inner city abortion clinic. That’s what the abortion industry thinks of human potential. Not worth the trouble, it says. These babies — these future Olympians and doctors and engineers and missionaries and artists and builders and soldiers and presidents and mothers and fathers, etc. — are inconveniences. Burdens. Parasites. Not worthy of even the most basic legal protections. Not worthy of anything but a scalpel to the skull.

And let’s remember that the abortion industry specializes in killing humans just like Simone. The vast majority of abortions are performed on unwed mothers just like Simone’s mother. Black women are four times as likely to have abortions — especially single black women — and if they live in the inner city, the probability is even higher. In some cities, little Simones are more likely to be aborted than born.