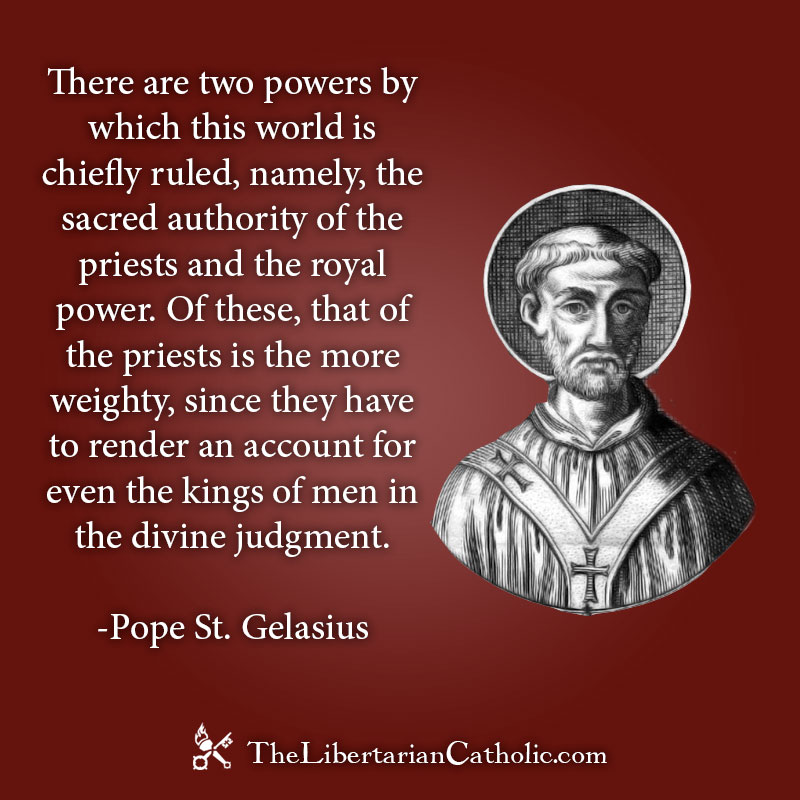 There are two powers, august Emperor, by which this world is chiefly ruled, namely, the sacred authority of the priests and the royal power. Of these that of the priests is the more weighty, since they have to render an account for even the kings of men in the divine judgment. You are also aware, dear son, that while you are permitted honorably to rule over human kind, yet in things divine you bow your head humbly before the leaders of the clergy and await from their hands the means of your salvation. In the reception and proper disposition of the heavenly mysteries you recognize that you should be subordinate rather than superior to the religious order, and that in these matters you depend on their judgment rather than wish to force them to follow your will.

If the ministers of religion, recognizing the supremacy granted you from heaven in matters affecting the public order, obey your laws, lest otherwise they might obstruct the course of secular affairs by irrelevant considerations, with what readiness should you not yield them obedience to whom is assigned the dispensing of the sacred mysteries of religion. Accordingly, just as there is no slight danger m the case of the priests if they refrain from speaking when the service of the divinity requires, so there is no little risk for those who disdain – which God forbid -when they should obey. And if it is fitting that the hearts of the faithful should submit to all priests in general who properly administer divine affairs, how much the more is obedience due to the bishop of that see which the Most High ordained to be above ,ill others, and which is consequently dutifully honored by the devotion of the whole Church.