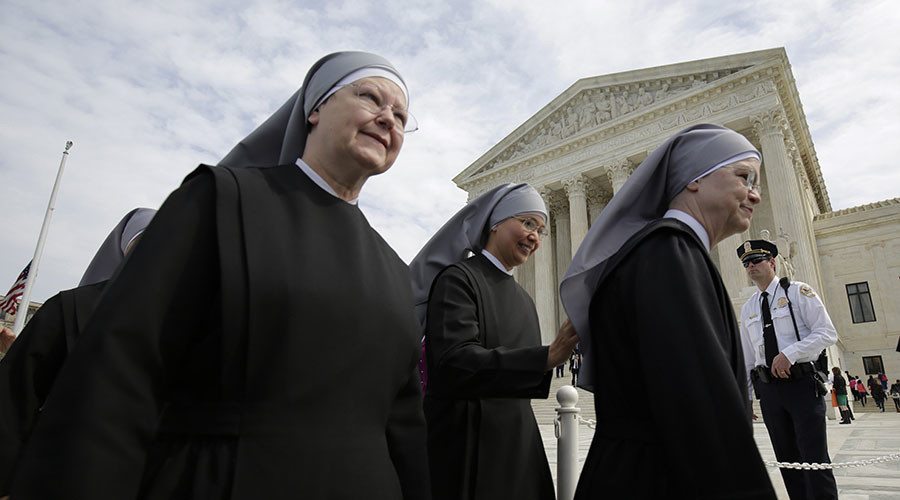 The Supreme Court ruled Wednesday that the Trump administration acted within its authority when it expanded exemptions to the Affordable Care Act’s (ACA) requirement for employers to provide insurance coverage that includes contraception — in a victory for Little Sisters of the Poor, the Catholic group that has been at the center of the national debate over the mandate.

The court ruled 7-2 in favor of the Trump administration and a Catholic charity that cares for the elderly in two related disputes against Pennsylvania, which sued over the validity of a rule from the Trump administration that allowed religious-affiliated groups and some for-profit companies to opt-out of providing contraception coverage to employees.

The majority opinion, written by Justice Clarence Thomas, ruled that the Trump administration had the authority to expand the exemption, which wasn’t even clarified at the time of the problematic ACA’s passage:

The statute does not define “preventive care and screenings,” nor does it include an exhaustive or illustrative list of such services. Thus, the statute itself does not explicitly require coverage for any specific form of “preventive care.”

All but Ginsberg and Sotomayor agreed with the Little Sisters of the Poor, including Chief Justice Roberts who has been increasingly irrational in his decisions.

For over 150 years, the Little Sisters have engaged in faithful service and sacrifice, motivated by a religious calling to surrender all for the sake of their brother. “[T]hey commit to constantly living out a witness that proclaims the unique, inviolable dignity of every person, particularly those whom others regard as weak or worthless.” Complaint. But for the past seven years, they—like many other religious objectors who have participated in the litigation and rulemakings leading up to today’s decision—have had to fight for the ability to continue in their noble work without violating their sincerely held religious beliefs.After two decisions from this Court and multiple failed regulatory attempts, the Federal Government has arrived at a solution that exempts the Little Sisters from the source of their complicity-based concerns—the administratively imposed contraceptive mandate.

We hold today that the Departments had the statutory authority to craft that exemption, as well as the contemporaneously issued moral exemption. We further hold that the rules promulgating these exemptions are free from procedural defects. Therefore, we reverse the judgment of the Court of Appeals and remand the cases for further proceedings consistent with this opinion.

Little Sisters of the Poor, SCOTUS