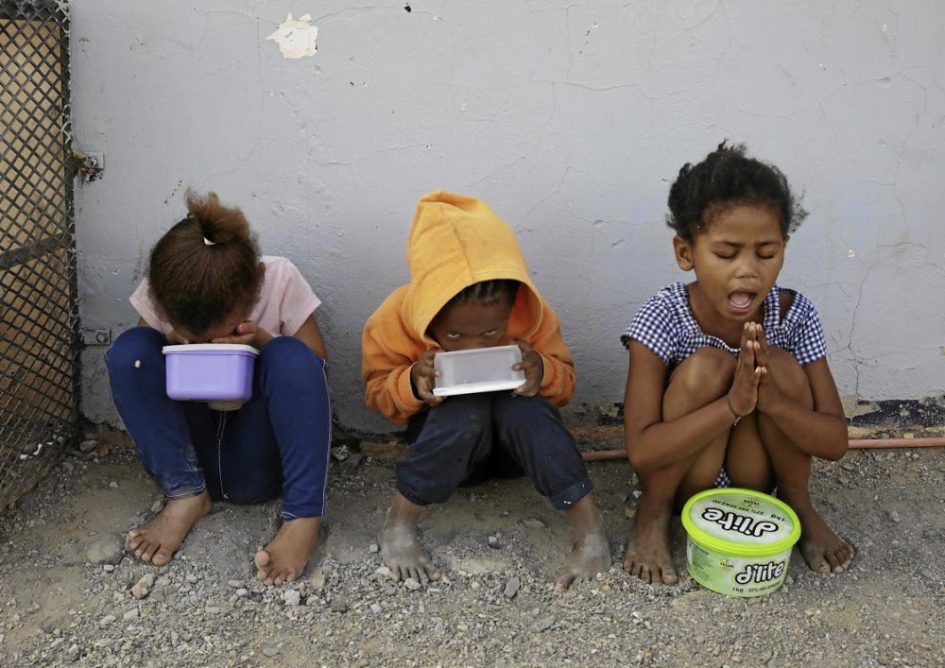 Children starts with a prayer before they were fed by Prince Albert Community Trust who providing them with two during lockdown at the POP centre . DATE: 15 April 2020, PICTURE: ESA ALEXANDER/SUNDAYTIMES

A new study shows that coronavirus restrictions and lockdowns are leading to the deaths 10,000 children per month and stunting the growth of millions more.

“It’s been seven months since the first COVID-19 cases were reported, and it is increasingly clear that the repercussions of the pandemic are causing more harm to children than the disease itself,” UNICEF Executive Director Henrietta Fore said. “Household poverty and food insecurity rates have increased.”

The study, conducted by researchers at Johns Hopkins University and published in the Lancet medical journal, said that hunger stemming from coronavirus restrictions is causing the deaths of 10,000 children per month and stunting the growth of another 550,000 per month:

The economic, food, and health systems disruptions resulting from the COVID-19 pandemic are expected to continue to exacerbate all forms of malnutrition.

“By having schools closed, by having primary healthcare services disrupted, by having nutritional programs dysfunctional, we are also creating harm,” Victor Aguayo, the head of UNICEF’s nutrition program, said.

The disruption of food chains has caused prices to rise, making it difficult for many regions that already had difficulty acquiring food before the pandemic even more difficult, and Dr. Francesco Branca of the World Health Organization said the disruption will be evident for years to come.

“The food security effects of the COVID crisis are going to reflect many years from now,” Branca said. “There is going to be a societal effect.”

An “increase in child malnutrition” is causing “steep declines in household incomes, changes in the availability and affordability of nutritious foods, and interruptions to health, nutrition, and social protection services,” according to the study. “Estimates from the International Food Policy Research Institute suggest that because of the pandemic an additional 140 million people will be thrown into living in extreme poverty on less than $1.90 per day in 2020. According to the World Food Program, the number of people in low and middle income countries facing acute food insecurity will nearly double to 265 million by the end of 2020.”

The warning of the dire repercussions of the pandemic as well as the efforts to combat it echo the findings of other studies that have suggested lockdowns are costing a significant amount of harm.

“You don’t just shut down a portion of the economy and expect to not have any consequences. Large and capitalist countries tend to adjust better, but less free economies already on the ropes will be devastated,” JSB Morse, head of The Amelior Institute said.

One study published in May suggested that coronavirus restrictions will destroy seven times more years of life than lockdowns will save.

Another study showed that drug overdoses are skyrocketing since lockdowns were imposed, and a doctor in California told a local news outlet he believes suicides are rising as well.