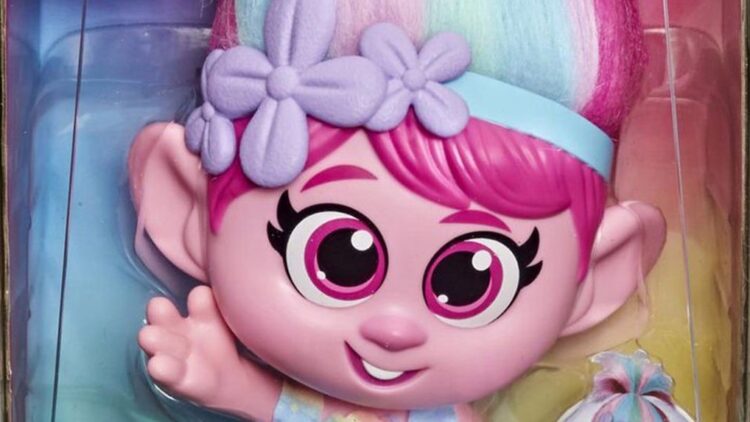 DreamWorks’ Trolls franchise has quickly become an immensely popular property for young audiences. This week though, Trolls has gained attention over a Princess Poppy doll that has been deemed inappropriate by over 200,000 petitioners.

You touch her tummy, and she makes little singing sounds and she’s super cute. Well, I was showing her to my husband and I heard some other sounds that I’d never heard before.
And if you look down here — I figured a video was the way — so I just touched her tummy and she’s going to sing for a minute. But down here is a button, right here on her privates, and if you push those, she makes these sounds.
(doll sounds Boop! Whee! Uhh! Ooh!)
Like a gasping sound.
And I know some of you might not, like, think this is a big deal, but especially since I’ve had kids — this is wrong.
For one, this button — it says nothing about this button on the box, nothing. It’s just, it’s just there. And it makes a gasping sound when you touch her privates. And to me it’s just like sexual sounds and it’s so disturbing.

A Hasbro spokesperson claimed, “This feature was designed to react when the doll was seated, but we recognize the placement of the sensor may be perceived as inappropriate. This was not intentional and we are happy to provide consumers with a replacement Poppy doll of similar value through our Consumer Care team.”

Despite this pathetic excuse, Hasbro made the decision to pull a Poppy doll from major retailers, including Target, Walmart and Amazon, after uproar began online in response to the placement of a button on the toy.